ATA 6Days 5Nights Tanzania Combine Safaris
This is a rich program that takes 6 days and includes a visit to all the most popular national parks in northern Tanzania. The itinerary starts at Tarangire rocky valley where giant baobabs grow, following out to Lake Manyara, covered with thousands of pink flamingos. Continuing the route goes down to the volcanic crater of Ngorongoro, aged more than two million years, and completed by a three-day game drive through the vast expanses of the Serengeti. You will have an opportunity to collect by parts the full picture of the wild world of Tanzania. Your trip will lie through the tropical forests and semi-deserts, filled with volcanic soil. Surely, these memories will stay with you forever.

The group arrives at Kilimanjaro Airport (JRO). Participants are met by a representative of Altezza Travel and transferred to a hotel in Arusha.

In the morning after breakfast (around 7:30 AM) your safari guide will arrive at the hotel and inform the receptionist that he is waiting for you. After meeting up with your driver you will travel to Tarangire National Park, and by 10:00 AM you will already be on your first safari!

In this park you have the chance to see lots of wild Tanzanian animals (lions, buffalos, giraffes, zebras, etc.), but above all else it is famous for its astonishing number of elephants, who typically tend to stay close to their drinking source, the Tarangire River.

You should be aware that this is wild nature, so the guide cannot make any guarantees on the presence of specific wild animals, but you can be sure he will do his best to find everything you’re looking for! The Altezza team has its own radio channel that the drivers use to communicate to other guides and collaborate on searches for rare species.

At lunch time you will be provided a meal, after which the safari will continue. In the evening you will be transferred to the hotel.

This is your first day on safari, so we ask that you please pay special attention to the national parks visitor rules and our company recommendations.

Thank you in advance for your understanding.

Early wake up time, breakfast and travel to Lake Manyara. The entire territory of this park is cut through with ground water streams that provide a favorable environment for plants and, in addition, for a multitude of birds (including pink flamingos) and African forest animals.

Around lunchtime you will visit the Maji Moto hot springs and the driver will provide you with personal lunchboxes. After this stop the safari will continue, and by evening you will be transferred to a hotel located on the edge of the Ngorongoro volcanic crater.

On this day it is best to leave the hotel as early as possible so you can see the variety of animals that are only active during the morning hours; breakfast will be packed in lunchboxes specifically for this purpose. At 6:30 AM you will set off for Ngorongoro Conservation Area, and after about an hour you will already be inside the crater.

Ngorongoro is one of the most famous and interesting of Tanzania’s national parks because here you can find the greatest number of different animal species per square kilometer. You will have the chance to see buffalo, elephants, lions, wildebeests, zebras, hippopotamus and feline species such as caracals and servals. The luckiest travelers might even see a rhinoceros, an animal whose numbers are rapidly declining.

By lunch time you will arrive at the lake side, where you will be offered lunchboxes, after which the safari will continue, ending in a few hours with a transfer to Serengeti National Park.

On your travels you will also visit a memorial dedicated to two West German researchers, Bernhard and Michael Grzimek. It is them we have to thank for Northern Tanzania National Parks having survived till our times in its current natural state. You can read their full story in the book “Serengeti Shall Not Die” which can be found on Amazon.com for USD 10–25.

In the evening you will be transferred to a hotel in the center of the Serengeti valley.

After breakfast in the morning you will safari in the eastern and southern parts of the park. The greater part of these areas is a savanna with wide open spaces, which provides a likely opportunity to see cheetah hunting antelopes.

In the evening you will be transferred to a hotel, where you will have dinner and be able to rest.

After breakfast you will start the safari by being transferred to the central part of the Serengeti (also called Seronera). Here your driver will try to find the animals you’re the most interested in. Closer to lunch time you will visit the Serengeti Visitor Centre, where you will be offered a lunchbox and provided with lots of interesting information not only about the animals’ populations, but also about the history of the National Park. Also, in this area you will be able to see hyraxes, which are the elephant’s closest relatives.

It is difficult to describe in detail all the animals of the Serengeti valley, for they number in the thousands: elephants, buffalo, ostriches, giraffes, jackals, hyenas, lions, antelopes, leopards and cheetahs—just keep your eyes peeled and enjoy the nature around you.

By the evening you will be transferred to the northern part of the Serengeti and then to your hotel.

Wake up, breakfast and the start of your game drive through the northern part of the Serengeti, which is in a league of its own when it comes to its landscape and diversity of fauna. On this day you can see the animals that only live in the most remote areas of the park.

By early afternoon you will finish the safari and return to the hotel in Arusha.

Rest in the hotel and transfer to the airport.

Note: Hotel check-out is at 11:00 AM. In case you need a late check-out because of an evening flight, you have the option to extend your hotel stay till 6:00 PM for an extra fee.

There are no reviews yet. 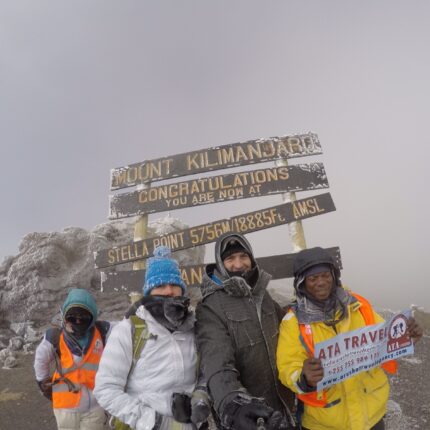